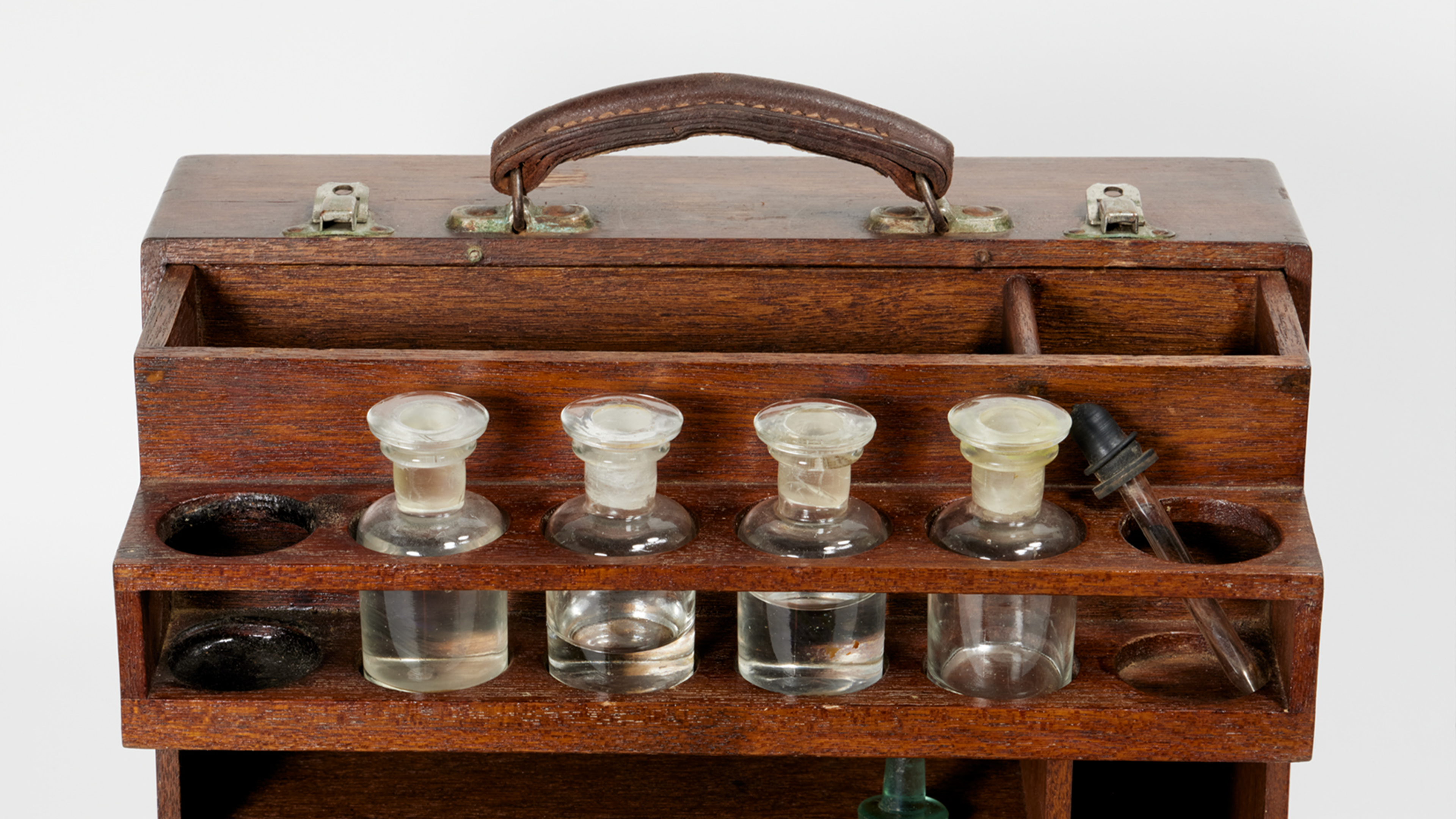 A Medicine Chest from Berry

From the 1920s, this medicine chest was kept and used by the Gall family on their dairy farm near Berry. It remained in the family until the property sold, around 2007. It is a simple but captivating artefact that offers an insight into basic medical care on a family-run farm in twentieth century Australia.

In the busy environment of a dairy farm, it would have been reassuring to have the chest so that minor injuries and ailments could be treated without calling on a doctor or pharmacist. Although medical help was available throughout these decades at Berry, it was quicker, cheaper and sensible to have some medicines close at hand, especially when living out of town.

Medical chests were kept and used in many, and usually wealthier, homes from the mid-nineteenth century.  By then pharmacy was a recognised profession and the medicines used from a medicine chest could be provided and refilled by a pharmacist. To guide the use of the medicines supplied, a booklet usually came with a medicine chest.  And while some medicine chests were very large and elaborate, this one is modest in size, but sizable enough to store core medical necessities.

The lower shelves of the chest would likely have housed items such as a tin of Aspirin pills, antiseptic ointment, scissors, tweezers, and dressings like bandages. The upper shelf held six refillable glass bottles for powdered and liquid medicines. With no labels on the remaining the four, it is unclear what they actually contained.

A typical domestic chest used in a 1920s home probably included smelling salts for reviving a fainted person, ‘Fishers Phospherine’ (valerian) for nervous anxiety, rhubarb tincture for indigestion, castor oil for constipation, or ammonia for insect bites.  Chapped or dry hands were a common problem for dairy workers, so a bottle containing syrupy liquid glycerin was often kept as a skin moisturiser.

Remaining in the chest today is a packet of bandages from around the 1960s, indicating the continuous use of the chest over the decades it was kept by the Gall family. And the empty bottle that once contained Picric Acid, historically used as a surface anesthetic for burns, was evidently dispensed by Vidler’s Pharmacy at Berry. 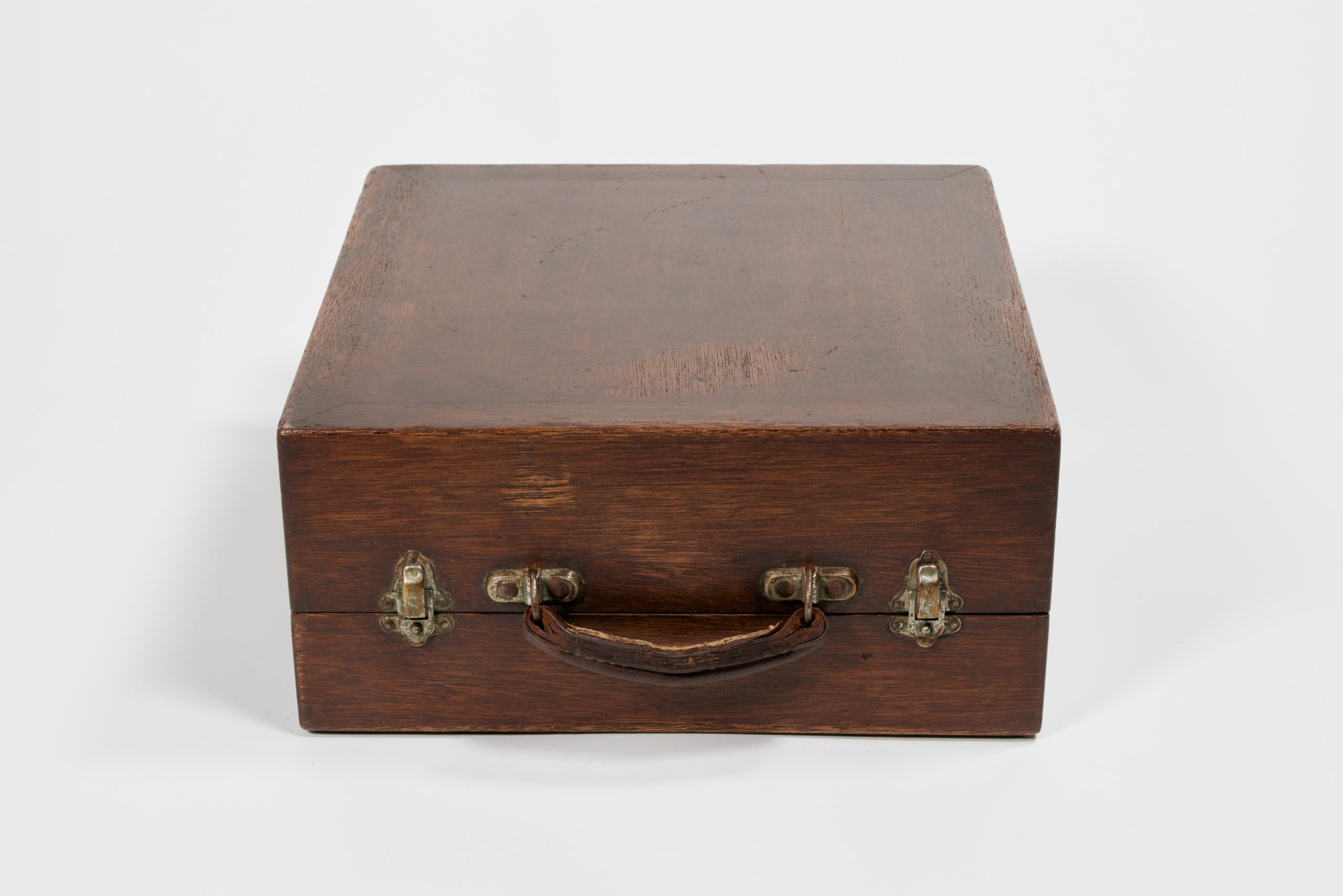 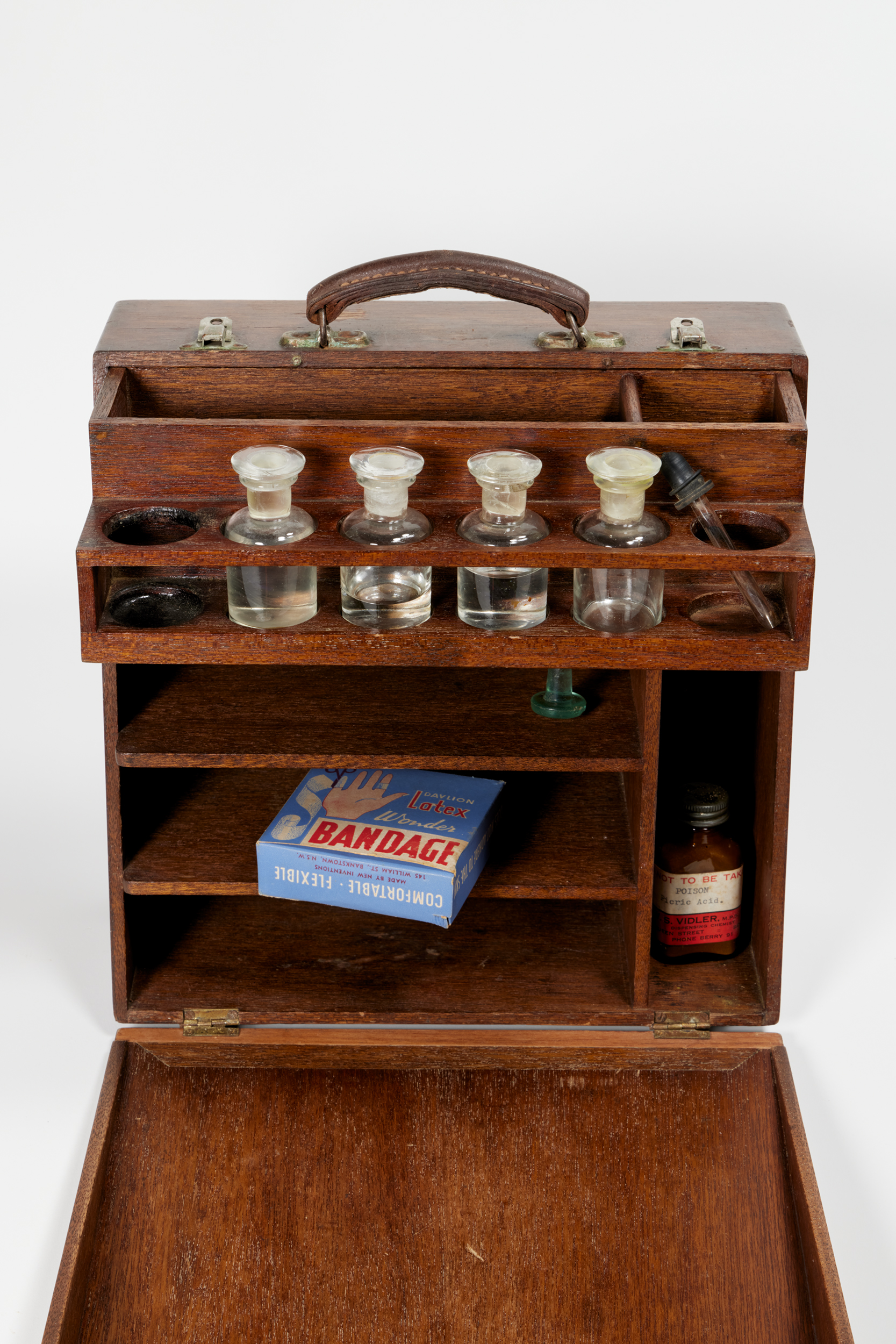 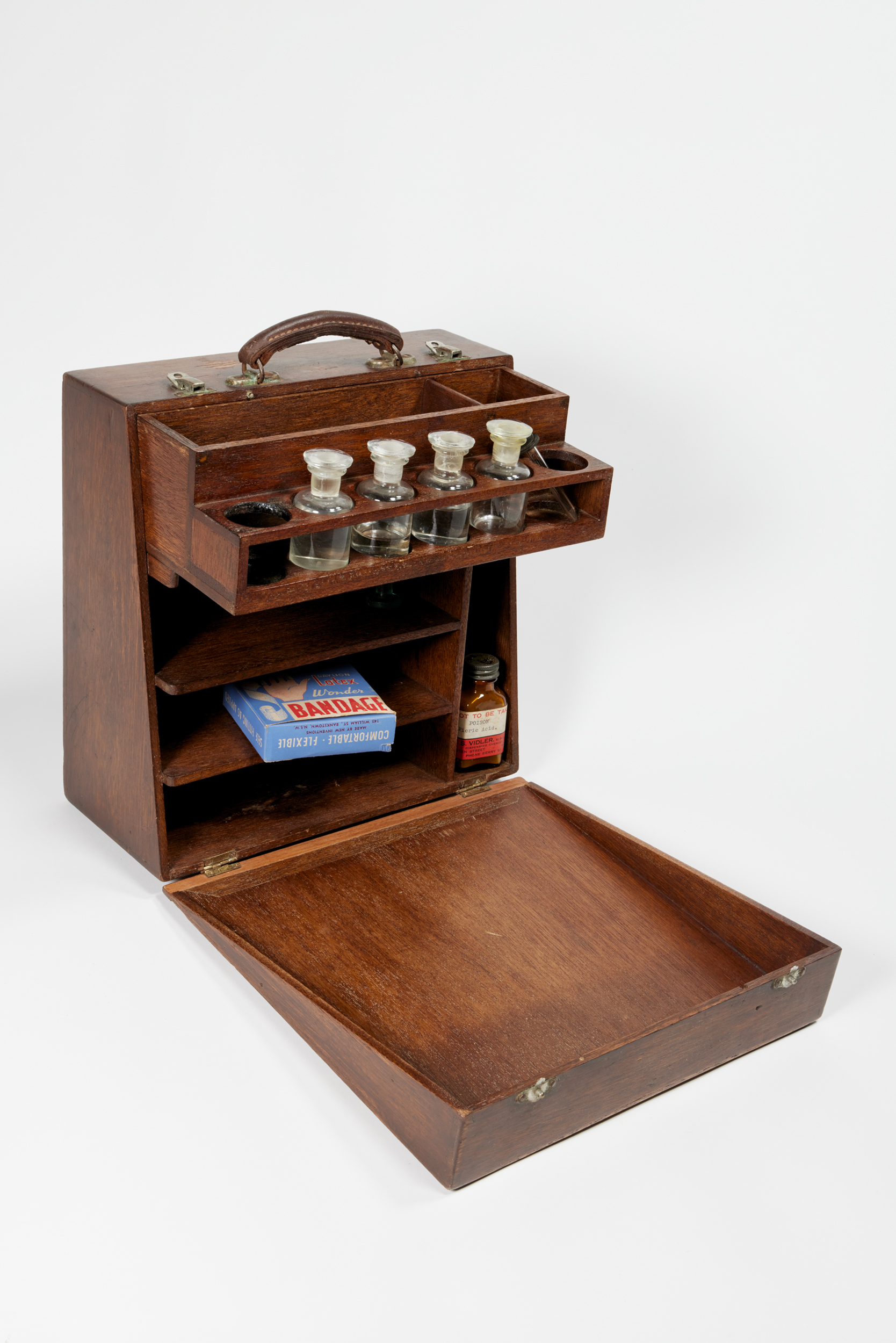 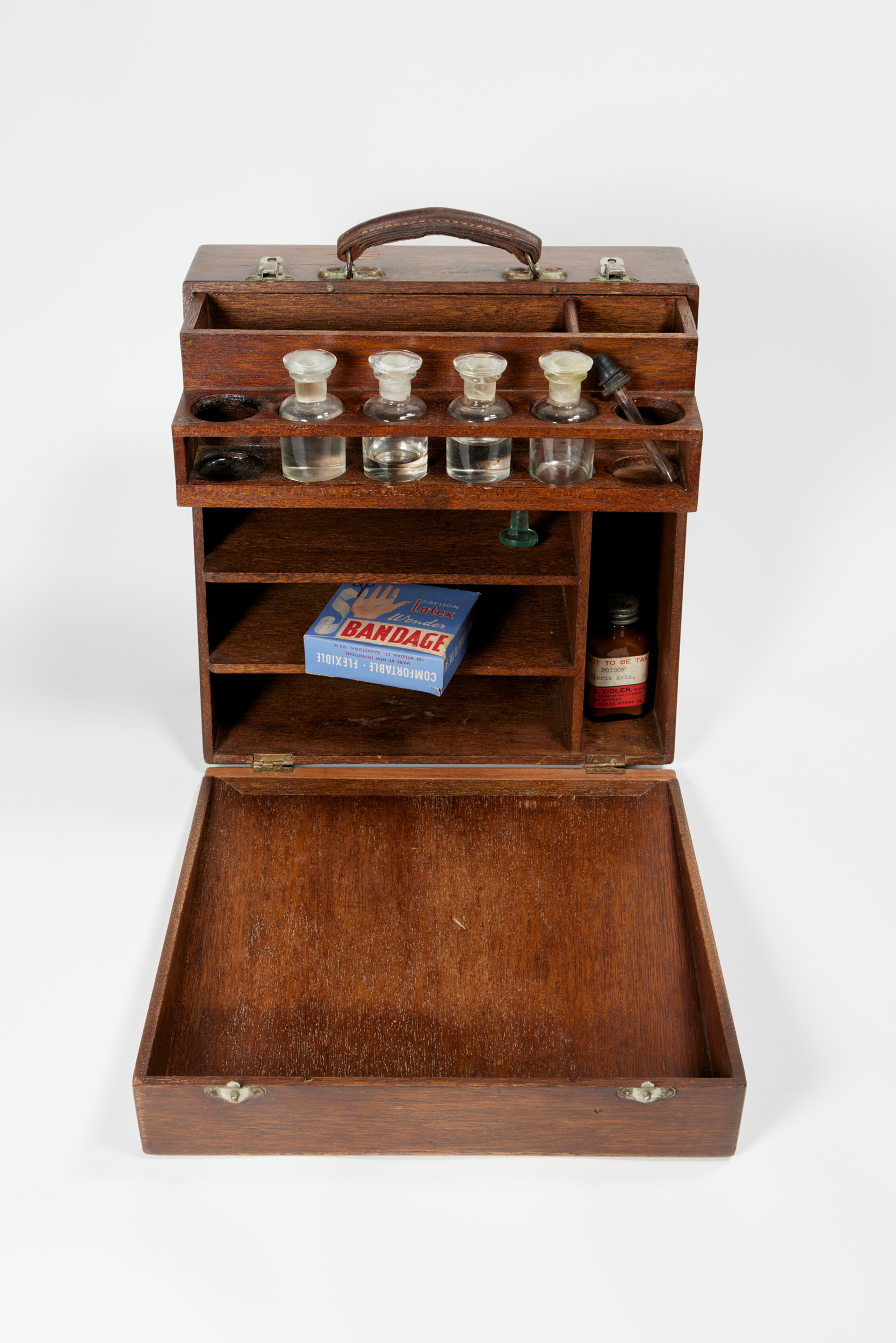 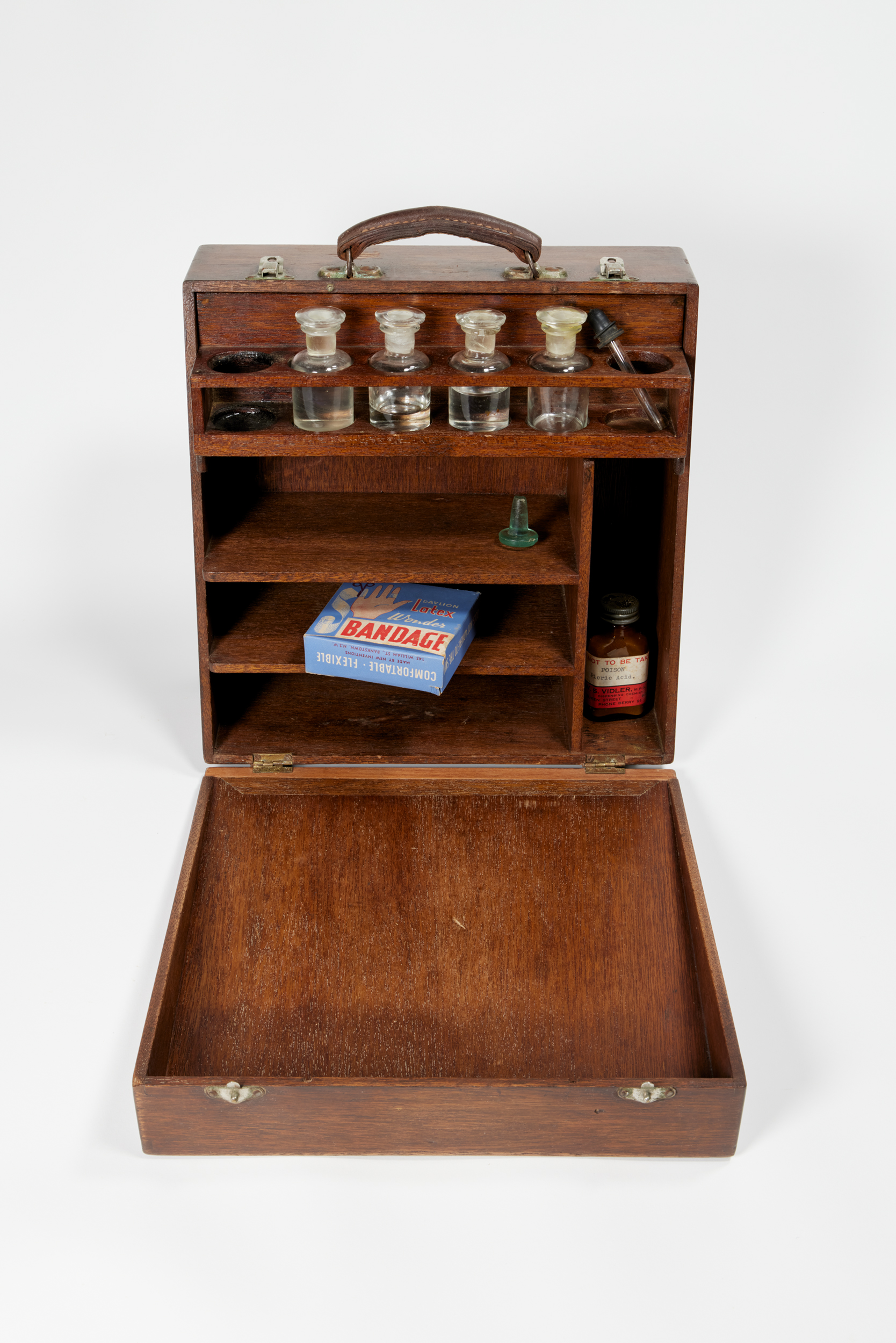 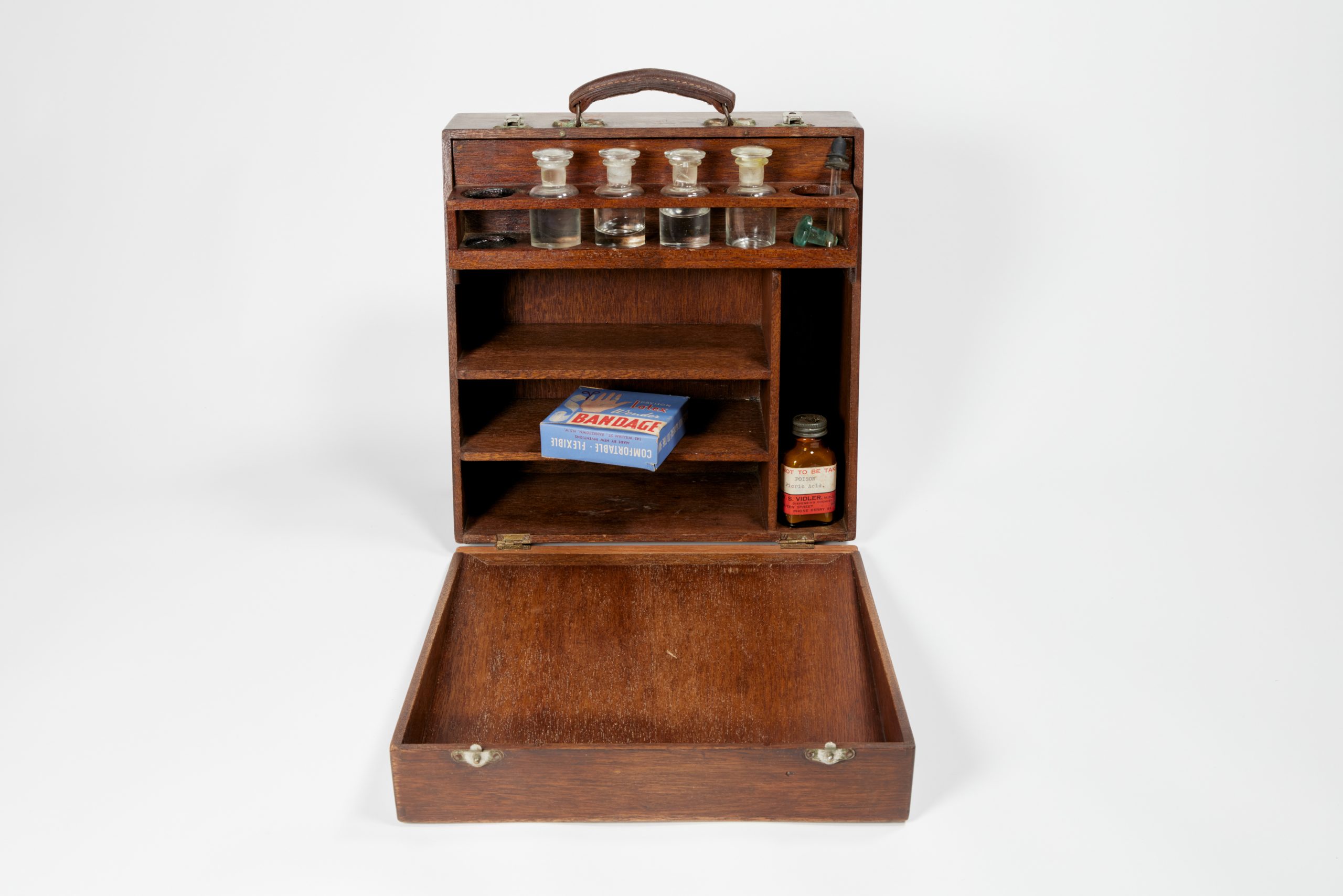 Susanna Ives, Floating World Blog, The Contents and Usage of an American Family Medicine Chest in 1818, posted 14 May 2019 (accessed September 2022).

Karen Hunt, ‘Cracked & Rough…What Real Dairy Farmers Can Do To Take Care of Their Hands’, The Bullvine website, 22 February 2016 (accessed 2022)