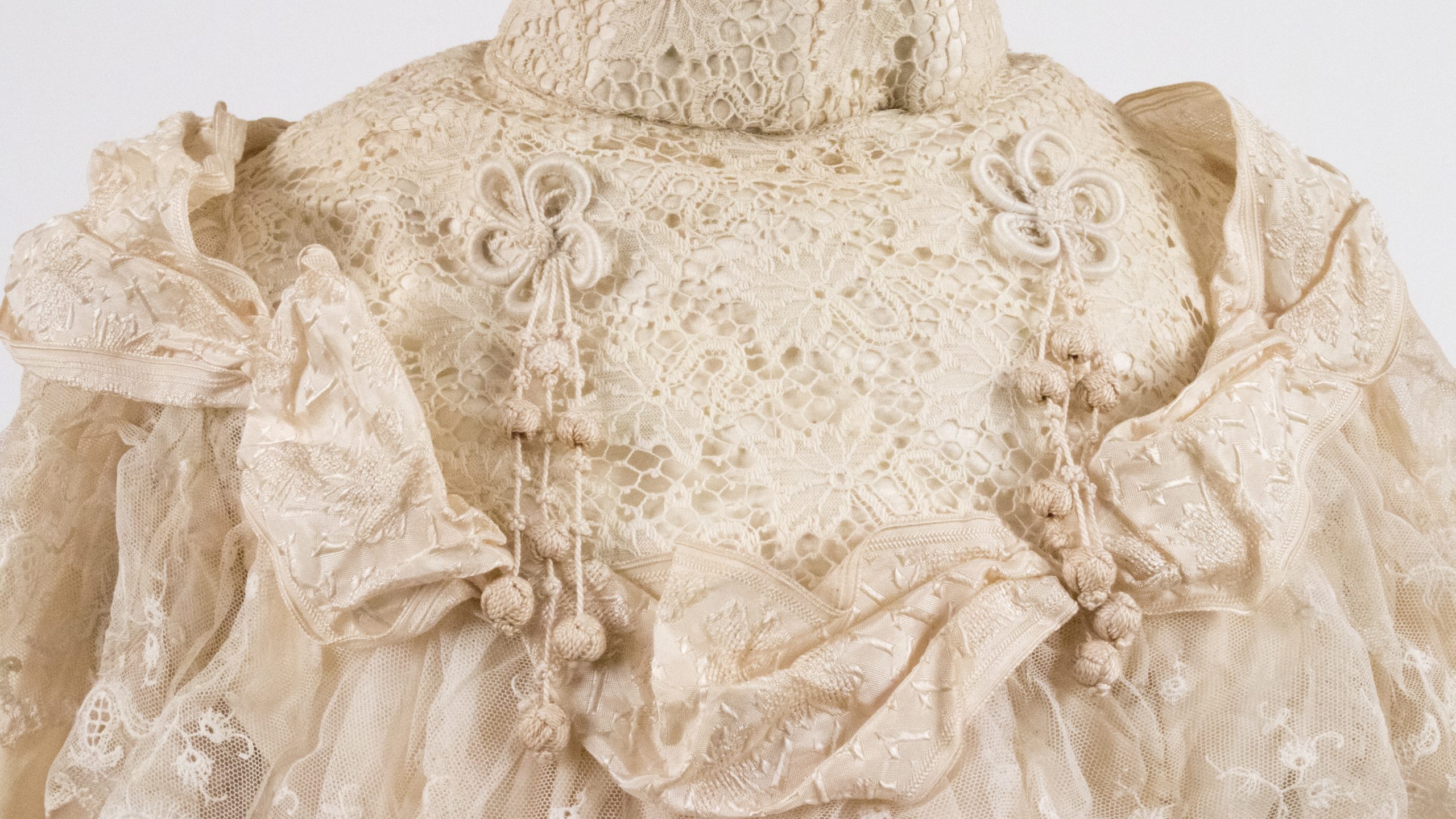 In This Dress Margaret Wed

In Australia throughout the twentieth century wedding dresses were often kept as a reminders of a woman’s transition to her new life as a wife, and for most women, mother. As a historic garment, a wedding dress can tell us a number of things, including information about the wearer and the times in which it was worn. Margaret Kingham, whose 1904 wedding dress is shown here, lovingly stored her dress until she died in 1948. It was then retained by her descendants until gifted to the Golden Memories Museum at Millthorpe.

Margaret and her husband James Kingham were both born into farming families who settled in the central west in the middle decades of the nineteenth century. They celebrated their marriage at Greghamstown near Millthorpe during winter in 1904 – on Wednesday 27 July – and so Margaret’s dress was made of wool crepe to give her extra warmth. The maker of the dress is unknown but it was constructed using a sewing machine, not hand-sewn. It was made as two pieces, a bodice and skirt.

Ivory in colour, the dress is typically Edwardian style. The skirt is ankle length and bell-shaped. The bodice has a high cotton-lace collar and bib along with a pouched ‘pigeon front’. The pouched front style intended to emphasise the hips and bust, which overall gave the wearer an ‘S’ shape silhouette. This look was new to the Edwardian era and resulted from the introduction and adoption of the ‘health corset’.

The bodice is also busily embellished with a wide tulle-lace flounce that is topped with a wide and generously embroidered braid; corded trims hang from the bib. The sleeves are long and narrow, gathered at the elbows and have a wide cuff that is ornamented with rows of satin ribbon. The lower half of the skirt is plainly decorated with several rows of the satin ribbon, and stitched gathers. Whalebone was encased into the bodice seams to support and emphasise the desired ‘S’ shape silhouette.

The ornamentation and detailing of the dress reflects Margaret’s interest in the fashion of her day and the Kingham’s comfortable way of life. The dress also reveals that Margaret was petite, as at some time it was altered by ‘letting-out’ the skirt waist and bodice band by four centimetres. During this era, and for several decades after, it was not uncommon for wedding dresses to be altered for re-use, either by the bride for whom it was made or another woman to whom it was loaned. 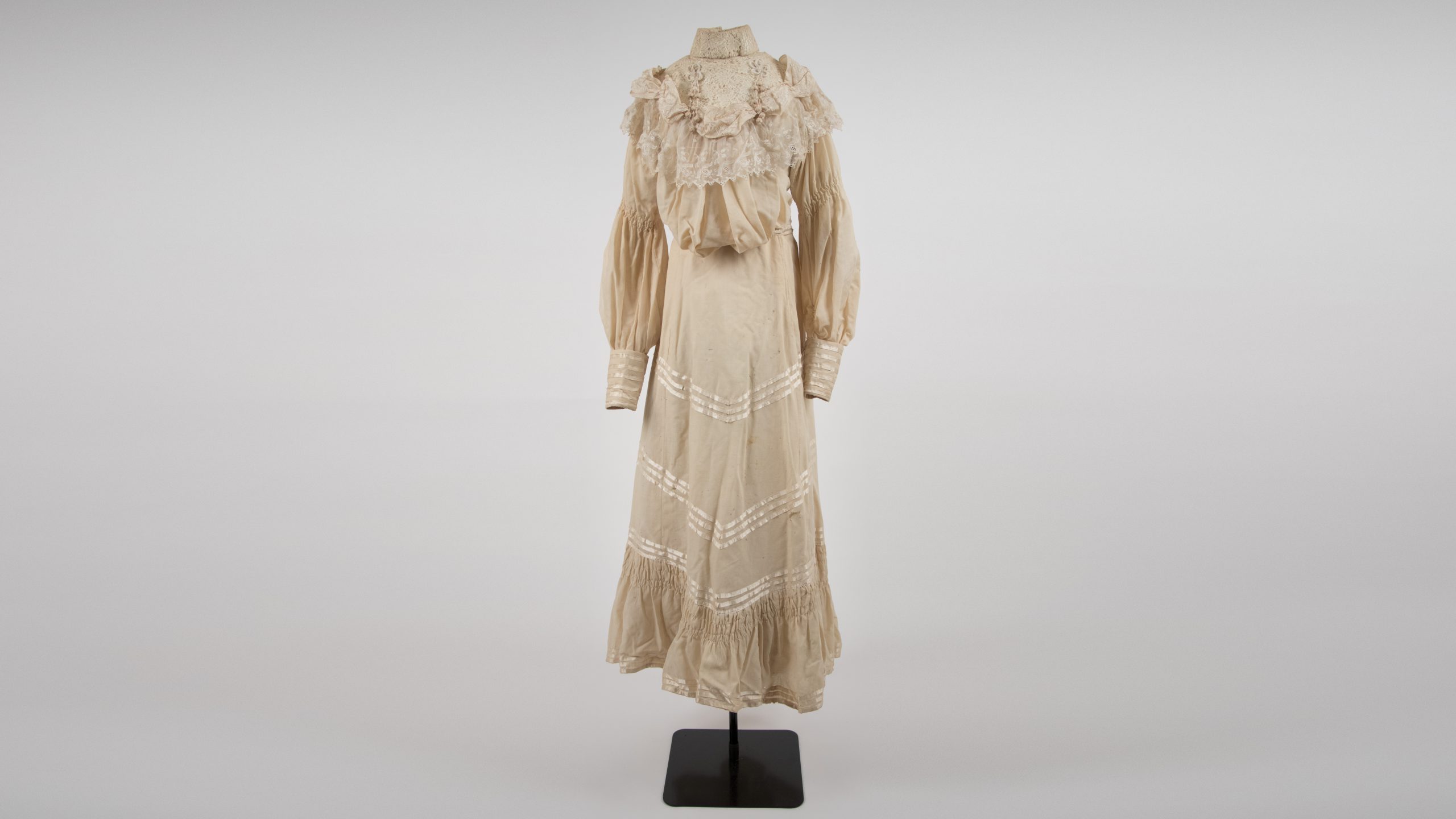 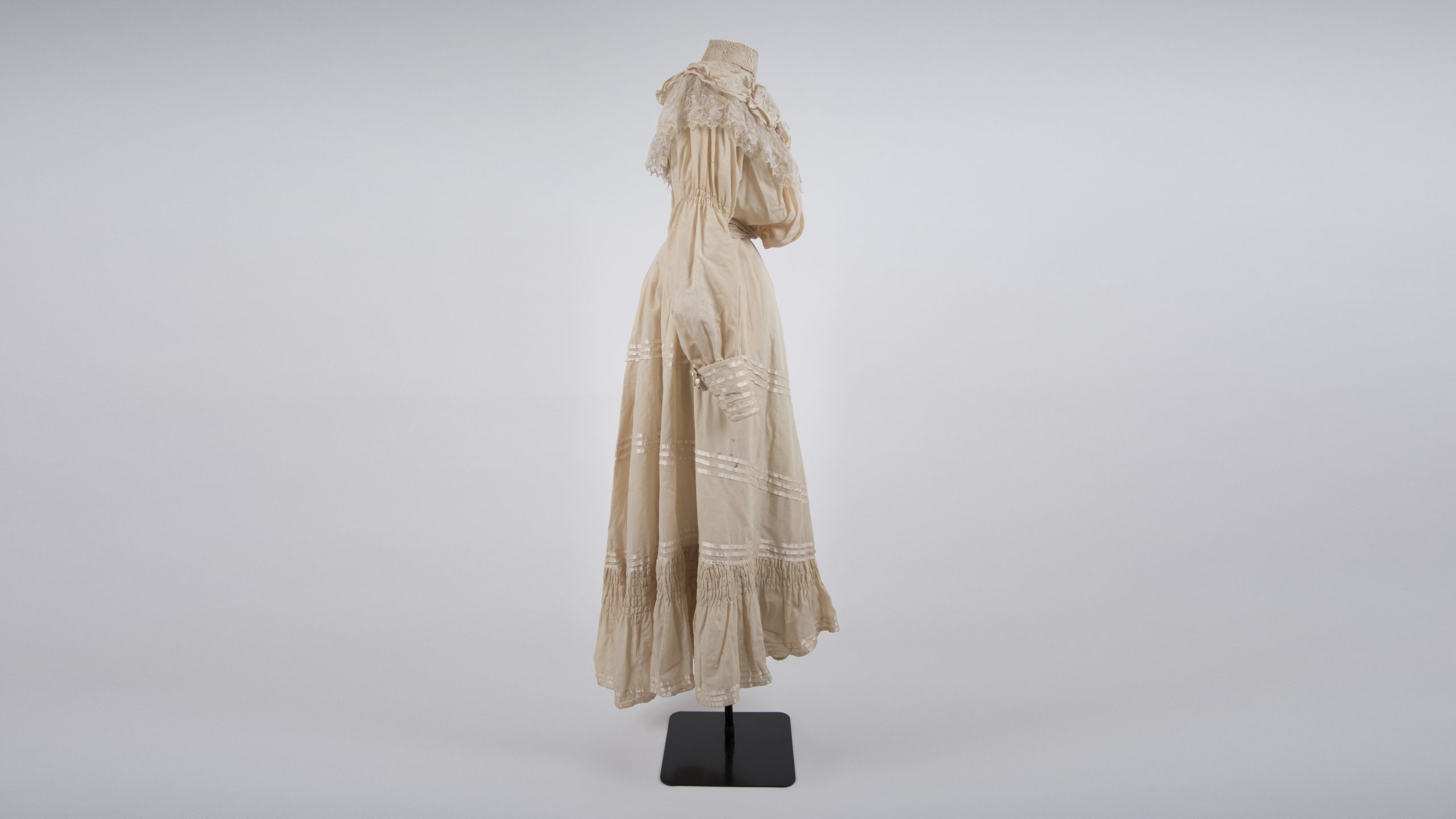 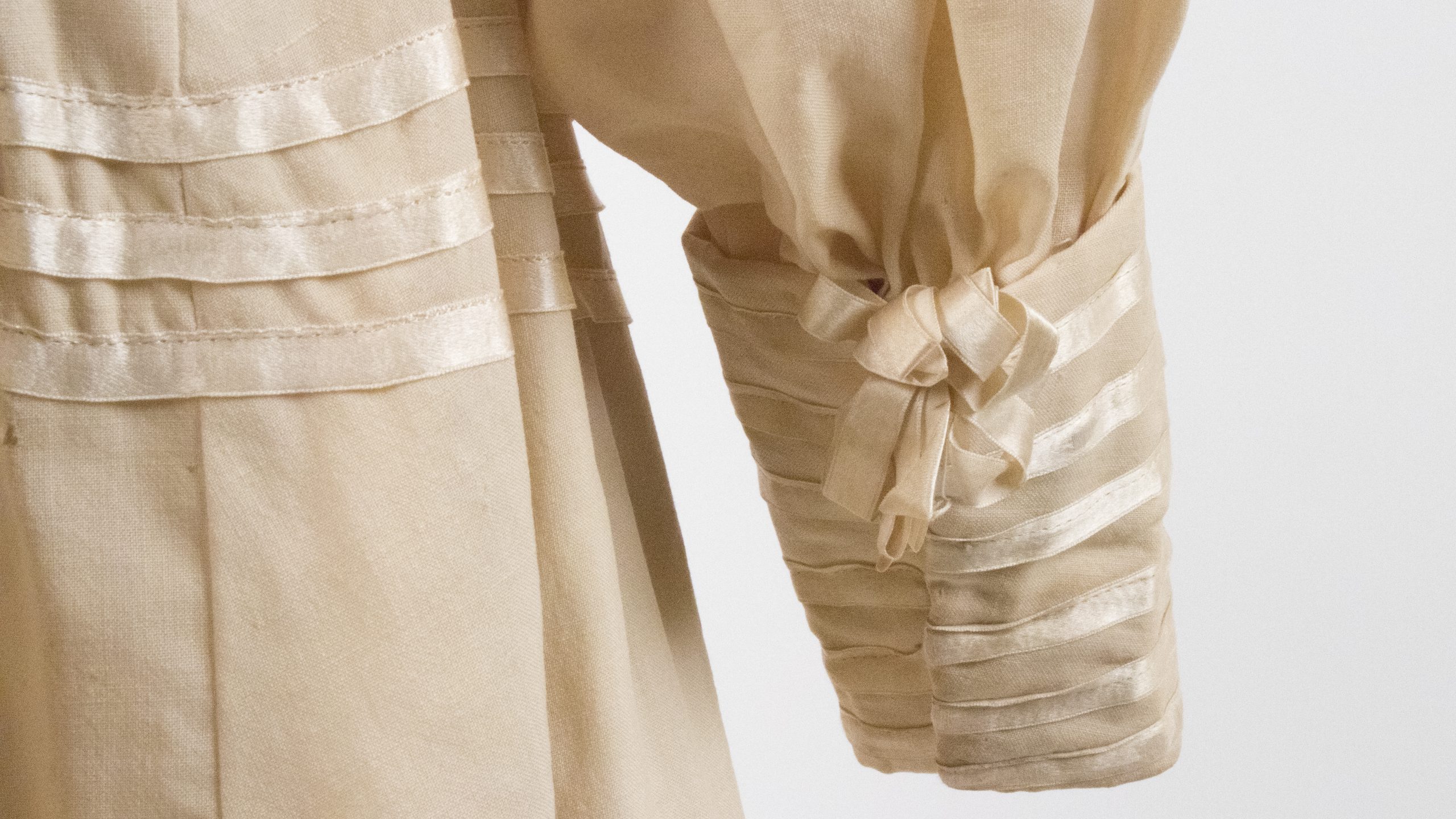 The Millthorpe Golden Memories Museum is run by the Millthorpe Historical Society and is located in the village of Millthorpe, on Wiradjuri Country, in the Central West region of New South Wales.

The museum occupies seven separate buildings and displays a large and important collection of historic objects, agricultural machinery and memorabilia illustrating the area’s social history, including the gold rush to the Central West in the 1850s. Many items also relate to early settler families and local businesses. 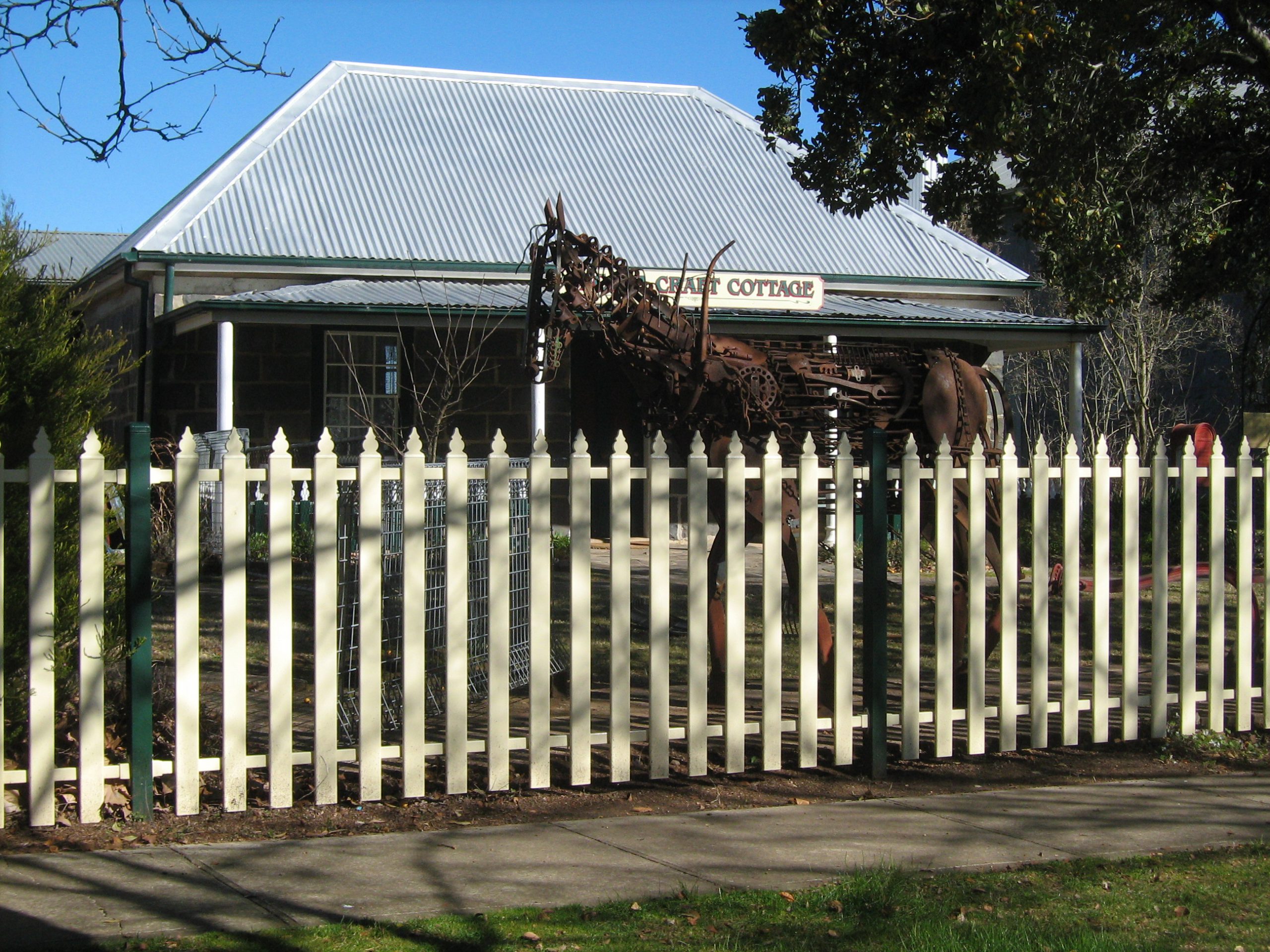